Maybe it was accidentally being booked into a Parisian brothel called ‘Le Chat Noir’ as an art student, or hunting out the forbidden red light district in Amsterdam at 16.

Either way I’ve always been in awe of the alternative, darker side to city life so skipping out on the notorious Bangkok Hang over tour based on Bradley Coopers hedonistic explorations was not an option.

We booked the tour expecting to mingle with a rowdy gaggle of Ozzies, Brits and other wolf pack enthusiasts but very quickly it became uncomfortable when we realised that it was only us that evening. 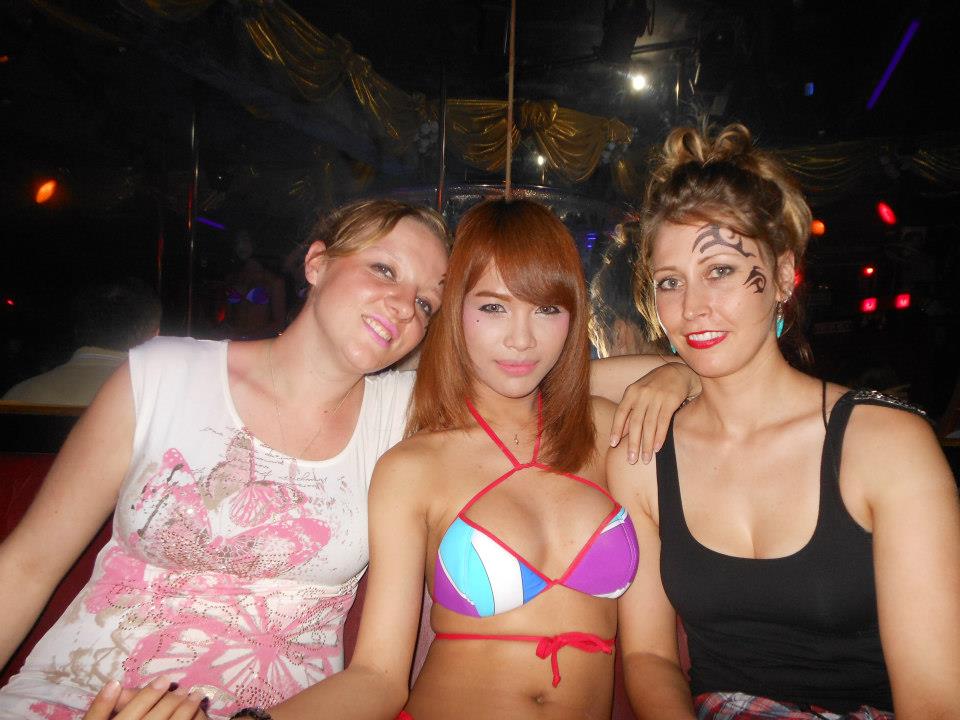 Our guide was a very exuberant Thai woman that came to pick us up at out hotel and drive us to the first bar.

We crept through a quiet backstreet before entering a doorway with ominous thick, red velvet curtains. Too late for second thoughts as we were ushered into an dim, empty nightclub complete with a small stage and odd wall projections of Celtic symbols. We were escorted in front of the dimly lit stage and handed 2 ice cold beers. We giggled nervously as we were handed ping pong bats. Our thighs sticking to the sweaty leather seating, whilst guzzling down as much strong, cool beer as we could to settle our nerves.

What began can only be explained as a procession of petite Thai girls, faces blank as they performed a multitude of tricks involving darts, balloons and candles. 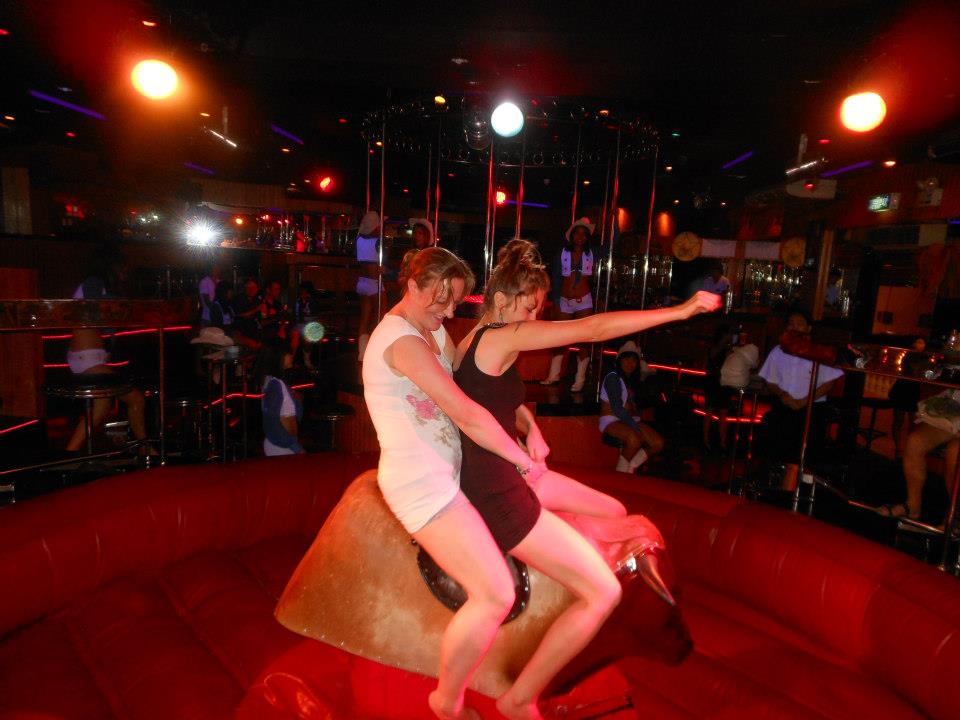 Their expressions instantly played on our conscience and only worsened when our empathetic guide told us they repeat the  performance throughout the evening maybe up to 10 times and get very sore and tired. Not ONE girl smiled, why would they?

Each were there to preform a trick they had preformed hundreds of times before, to 2 nervously giggling females rather than the usual paunched western, middle aged men that frequent these places. 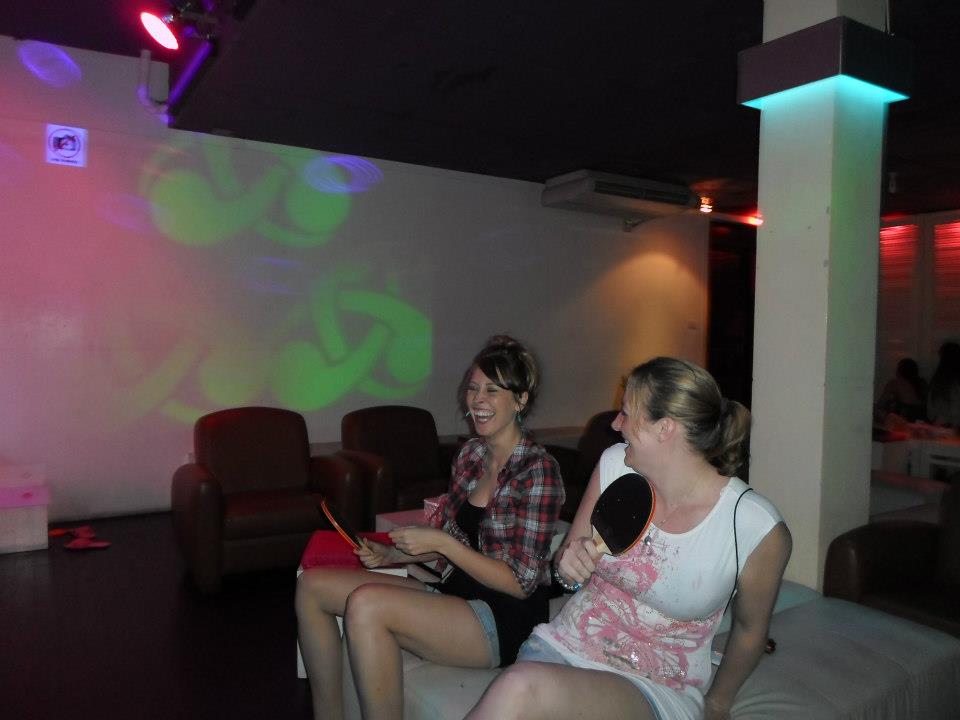 Watching the incredibly skilled performances, the girls completely tuned out to what was going on around them and just trying to get the job done as quickly as possible made me do something quite unexpected.

I stood up and clapped loudly and cheered. At first my friend looked at me with horror before she saw the expressionless girl on the stage look at me, rooted to the spot, before a huge grin broke out on her face. Before long we were both clapping and cheering  for each girl, feeling the guilt lessen slightly as they turned to us and giggled and smiled.

I can think of no other explanation to my outburst other than as a woman myself, feeling guilty of my presence there, pity for what they have to go through each night and to show an odd appreciation of their talents. A really screwed up girl kind of power. 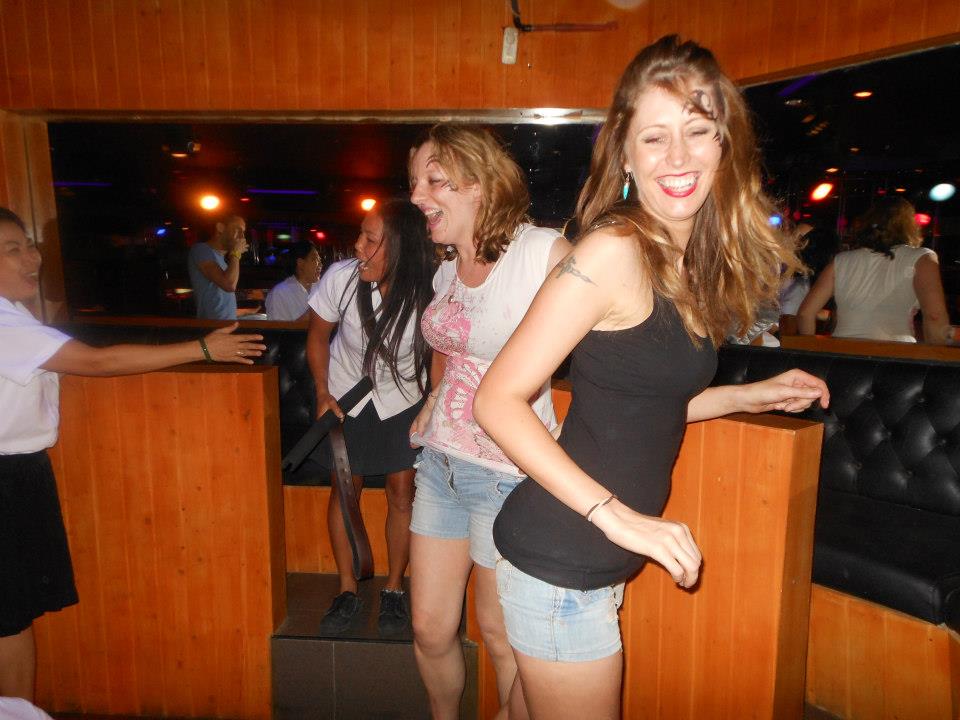 The rest of the night followed a succession of strip bars and lady boys from infamous scenes in the film and fake Tyson face tattoos. The mood actually lightened after the drink started flowing and we left the first bar and we started to enjoy ourselves. We climbed on a bucking bronco in one strip bar and had competitions with the local dancers to see who could stay on the longest. We shared drinks and danced together.

As for the Ladyboys, they have to be the most feminine, dainty beautiful women I have EVER seen.

All in all, we did have an unforgettable, amazing night. A one off experience to be remembered. That was the point of it after all.  Our guide was amazing, spoke great English and made sure we were looked after at all times. 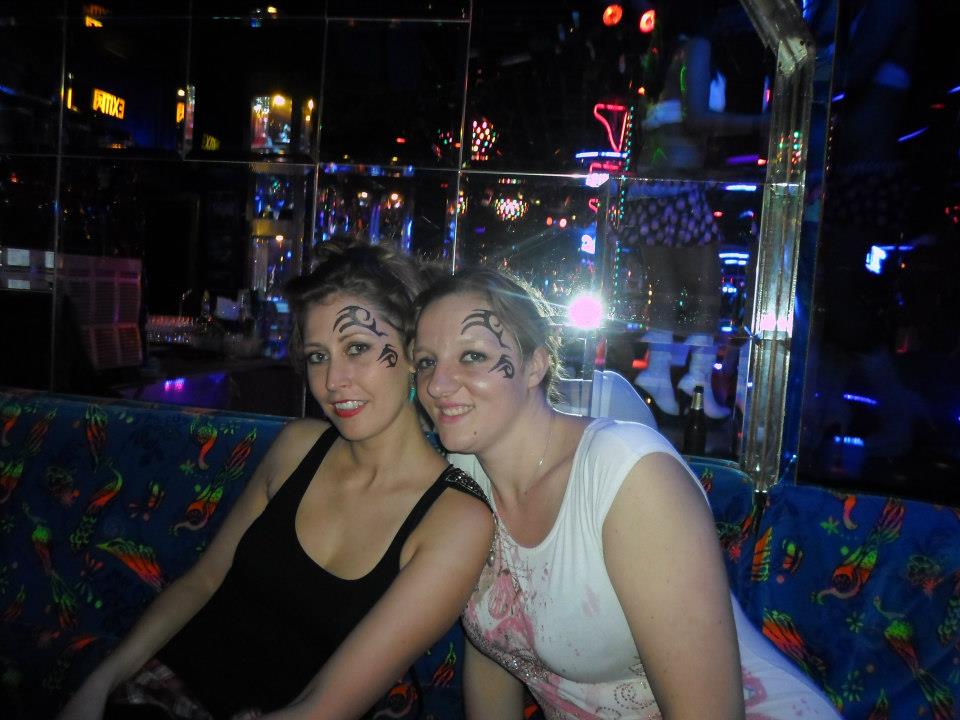 I just haven’t been able to shake off the look on the girls faces. Even when you’re aware a lot of the girls are considered lucky to have a job and provide for up to 3 generations families. Where there is a demand, so it will always be.

And  I would be a COMPLETE hypocrite unless I admitted I have been in plenty of strip clubs with friends, drank at the bar with the girls and appreciated not being hassled by any guys. But it was a completely different scene over there. A real sense of ownership over the girls and how many are there over their free will?

I just think next time, when it comes to Bangkok I will not add to its numbers.

Koh Sumui – I never thought a  tropical island paradise would also associate itself with hundreds of packs of stray dogs, scavenging the streets and beaches, some in terrible condition. Also called “Soi” for street, upon arriving at the airport you will see strays wandering on every street corner, sleeping in the dusty back streets in the humid sticky heat and scavenging for food from bikini cladded tourists baking on paradises beaches. Back streets can be intimidating with packs barking at you if you cross their turf.

Nearly every dog we encountered was infested with sores and fleas with a bit of mange mixed in. Being an animal lover we were quite taken in by a tan crossbreed that would sleep outside our hostel door. We were careful not to feed him ( ashamedly at first ) as we didnt want him to become reliant on our food as we were leaving in a few weeks. I called him Ugg and I would wake up in the morning with my latest hangover and sunburn to see him laying outside our porch sleeping on the cool tiles. He would follow me as I would trudge under a canopy of coconut trees down to bath in the shallows. At first he was reluctant to join me but by day 3 we would swim every morning and fall asleep in the shade. I always made sure he had fresh water and my name maybe should have been mug as I got pretty plastered one night, stumbled up the stairs to our villa and feel to the floor where he was waiting for our return and started hugging him. The last words from my friend were, ‘Sian, your going to get flea bites.’ Upon waking the next day I was covered in 34 and itched for the rest of the holiday.

There is now a rescue foundation on the island established in 1999 – Rescue Sumui Foundation – that helps to home and neuter these animals, also treating them for mange, worms and fleas. Dogs and cats are frequently hit by vehicles and are left to die laboriously  on the road side. The lucky ones find themselves here. The government  originally used to control the situation with mass poisonings much to the shock of the tourists. Even though they have synced stopped doing this, victims of poisonings occur every week at the centre.

We met an American tourist that would de flea the strays on the beaches. One female stray used to follow him everywhere to the point where he went on a 20 mile hike and she refused to leave. Even when he crossed a fast flowing river he decided that if she made it across then he would adopt her never expecting her to take such a risk. Much to his horror, she battled across the fast flowing water to end up in his arms as he waded in cursing to meet her. After that day she spent the rest of her time with him in a 5 star villa before being adopted and starting a new life in Seattle with regular walks in the forests.

Although not immune to this suffering having lived in Palestine and treating the strays there, it never ceases to shock me how too many locals to count can walk by a dog dying by the roadside.